In addition to visiting the art gallery in our office a few especially talented artists have opened their homes and workshops for you to visit and purchase their artwork directly from them. At our office you can pick up a brochure highlighting the various artists. On the back is a map showing where in Vadu Izei you can find each one. Almost all are within easy walking distance.

She was born in 1930 in Vadu Izei and learned to weave from her mother when she was still a child. At 21 years of age she was married and began working by herself. Like all married women of the time she was responsible for weaving all of her family's clothing and blankets.

Nothing brings her more pleasure than creating the lush, warm blankets ("cergi") so prized in Maramures. She also makes handmade clothing and handbags. Using the simple, traditional colors of Vadu Izei Maria creates objects that warm both the body and the soul.

When she is not weaving she works her fields, cares for her animals, works in her house and tends her prized flower garden. 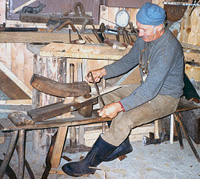 Vasile, born in 1938, inherited his father's gift for carving and surpassed it studying with Maramures legend Gheorghe Borodi in his workshop. Starting in 1965 he found occasional work carving traditional gates in Vadu Izei and in other parts of Romania. Encouraged by master artist Vasile Kazar, Apan began carving incredibly expressive totems.

Apan has participated in many folk art exhibitions in Romania and abroad. In 1970 in The Hague, Holland, he exhibited an entire series of traditional folk-masks from Vadu Izei and Maramures.

Vasile's vast knowledge of the traditions and myths of Maramures combined with his skill as a wood carver make a visit to his studio a must. In these traditions is where he finds inspiration when carving. From simple wooden spoons to monumental wooden gates Vasile captures the heart of Vadu Izei. 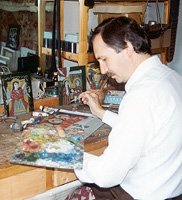 Ioan is almost entirely self-educated as a painter. He has dedicated his gifts with the brush solely to the creation of glass icons traditional to Maramures. Through his icons he expresses the spirituality and modesty which illuminate Vadu Izei and all of Maramures.

Ioan has exhibited his work in Romania as well as Belgium and England. His icons can also be found in private collections in Romania, Germany, England, Belgium, United States, Denmark, France, Italy and Japan.

Ioan is also a poet, plum brandy distiller, farmer and dancer. He is most recently a published author, writing the definitive guide to the Maramures region and its customs, traditions and folklore, "Vadu Izei and Maramures, In the Land of the Romanian Village." See the page About Maramures and Vadu Izei for more about the book.

Ileana learned the art of weaving from her mother. In 1995 she founded the first workshop in Vadu Izei to reintroduce the vegetal dyes once traditional to Maramures. Ileana Borlean hand dyes the wool she uses extracting the colors from local plants.

The use of these dyes brings a balance and harmony to her art that has been lost in the modern world. Her abilities as a weaver along with her insistence on traditional patterns and colors have kept alive this part of Maramures.

Ileana also teaches classes in traditional weaving and dying. In 1997 Ileana Borlean, supported by O.V.R. International, founded a workshop on weaving and traditional dyes open to all interested in learning these ancient arts. 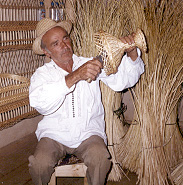 Mihai began weaving at the age of eleven. His teachers were his parents, his older brother and a neighbor, Gurgiu, an expert with straw and reeds. He attended the local school and when he was finished he immediately went to work in the village creating beautiful wicker baskets of different shapes and sizes.

In 1997 he found support through the program Phare-Rural Tourism. He is now immersed in his vocation. He makes an incredible assortment of woven objects for the locals of Vadu Izei and tourists who visit his workshop. Mihai has become a master weaver capable of creating incredibly complex and beautiful objects. Visitors are always made to feel welcome in his workshop where he weaves wicker, reed and even peanut stalks into beautiful things.